Take yourself forward, for a moment, and imagine it is the year 2030. Children born today are preparing for exams and starting to think about their future careers. China is now the world’s largest economy. Mandarin is taught in schools right across the world. And a new Silk Road for international trade, made up of roads, high-speed railway lines, bridges and airport hubs, stretches from Shanghai and Beijing through Xinjiang to Kazakhstan, Pakistan and Afghanistan before making its way to western Europe and to Britain.

This isn’t a fantasy. It is the 2030 that most economic forecasters now predict. Over the last 15 years, China has surpassed the UK, France, Germany and Japan to become the world’s second largest market. Its growth has been phenomenal. Even now, it is creating an economy the size of Australia every two years. There are those who say we should fear China’s rise – that we should somehow guard ourselves against it. But we reject such thinking, which would simply leave the UK slipping behind.

Instead, we should embrace it. We want a golden relationship with China that will help foster a golden decade for this country. It is an opportunity that the UK can’t afford to miss. Simply put, we want to make the UK China’s best partner in the west. 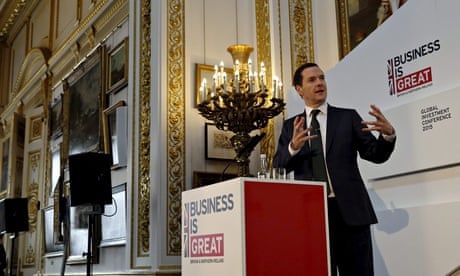 George Osborne: We should embrace China, not fear its rise

Ahead of China visit, chancellor says UK must be ‘best partner in the west’, and develop financial and cultural links
Read more

So over the next five days we will be travelling around China promoting the best of British culture, showcasing the “northern powerhouse” and offering its firms and authorities support from our world-leading financial services industry. We will be travelling not just with leading British business leaders but the leaders of our great museums and theatres. We want to promote understanding between our two great cultures, which have arguably done more to shape the world than any other. We won’t just be travelling to China’s great cities, but also to inner China, to areas where no UK ministers have been before. It’s these regions of “new China” that will help power its growth in the decades ahead.

As China’s global influence grows, so too must our relationship. But as we integrate further, of course we do so aware of the inevitable risks: risks that have come to a head in the last few months with turmoil in Asian financial markets that spread around the world. In the UK, we saw the FTSE fall by 4.7%, and in the US the S&P fell by 3.6%.

But recent volatility will not put us off. It should drive us forward so that we integrate China’s new financial markets with our own so they are deeper and better able to absorb shocks. Then it should serve as a reminder to get our house in order so that we can deal with global difficulties. We need to continue working through our long-term economic plan, which will mean that we run the biggest economic surplus for decades and begin bringing down our national debt.

Our economy is already growing faster than any other major advanced economy, our deficit has more than halved, and employment is near record highs. But if we are to sustain this in the longer term we must continue integrating with the world’s fastest growing regions. That has been a plan we have followed over the last five years, attracting more Chinese investment to the UK than Germany, France and Italy combined, with our exports up 73%.

Even as China’s growth slows, it will continue to be a powerhouse for the global economy. As China pushes ahead with its own reform programme, with increased consumption and a demand for services, there will be many new opportunities for the UK. Opportunities for UK manufacturing, infrastructure, retail and financial services. There will also be opportunities to attract new firms to the UK, such as Huawei, which opened its global R&D centre here last year.

This government will ensure that the benefits of our stronger relationship with China are not just felt by those in London. That is why the business delegation is not only composed of leaders from London, but businesses from the north of England, from Wales, and from the south-west will also be represented. It is also why we will be taking civic leaders such as Sir Richard Leese, head of Manchester city council, to meet their Chinese counterparts.

We hope our dialogue with China’s leaders will pave the way for a successful Chinese state visit next month – the first for a decade – when the Queen and prime minister will welcome President Xi to the UK. We are at a critical moment in our relationship with China. We need to double our efforts to strengthen our economic links, help British firms enter the market there, and attract more investment into the UK and the northern powerhouse. Rather than standing back and being left behind, we must make the most of the opportunities that a growing China presents to us.